How Does Your Home Value Stack Up?

If you are familiar with Boise real estate lately, it will come as no surprise to you that the housing market is strong. As more people move to the Treasure Valley for jobs, retirement, etc., the inventory of existing homes decreases. Some houses are being purchased sight-on-seen and others unseen from neighboring states!

So, let’s see what the numbers say… Boise Regional REALTORS® has published its report using data from the Intermountain MLS through August 11, 2017.

Here’s what it says:

At Boise Regional REALTORS® (BRR), we feel like we’ve been talking about low inventory for months… and for good reason. A few weeks ago, Zillow’s Chief Economist Svenja Gudell posted on Twitter: “Inventory down YoY for 25 consecutive months now. We’re just past 2-years into the #inventorycrisis.” While we never like when the term “crisis” is used to describe the housing market, the sentiment reflects the pressure that many home buyers are feeling caused by the low inventory levels, especially for existing homes.

Gudell’s comments were based on nationwide trends, so what does this look like in the Boise Region?

Based on monthly data, inventory of existing homes in both Ada and Canyon counties has been down year-over-year for 34 consecutive months, starting October 2014. Let’s break this down by inventory (supply) and pending sales (demand)…

Looking at months supply of existing inventory — which takes the number of homes for sale divided by the average number of sales by month — there were 3.2 months in October 2014 in Ada County to 1.4 months in July 2017, a drop of 56.3%. (A balanced market—not favoring buyers or sellers—is typically between 4-6 months supply of inventory.) 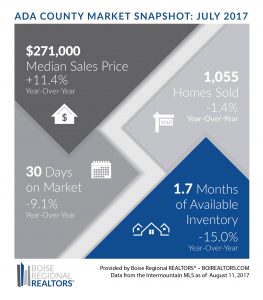 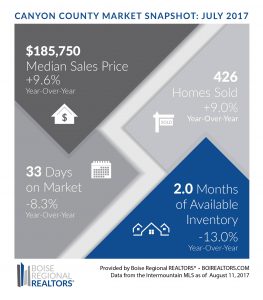 How has the decrease in supply and increase in demand influenced home prices in the Boise Region? The median sales price of existing homes in Ada County increased 34.2% between October 2014 and July 2017, and increased 42.2% in Canyon County during that same period, illustrating BRR’s familiar refrain of how home prices are being driven by demand compared to supply.

For the full report and to see graphic breakdowns on specific areas, existing/resale versus new construction, click here.